Since 2009, French developer Pastagames have been making games featuring a beaming, pixelated cat. Pix’N Love Rush and Pixel! warmed hearts and challenged thumbs in the past. With their newest title, it seems as if their mission to establish Pix as a legitimate character has finally come to fruition. In Pix the Cat, players take control of the jolly blue cat in infinite attempts to hatch ducks, score points, and go deeper. Pix the Cat features three main play modes that amount to many hours of addictive gameplay. The overall presentation is bursting with character, and the sound design is top-notch. For highscore chasers with a penchant for Pac-Man: CEDX, Pix the Cat is a no-brainer.

The main play mode, available at startup, is Arcade. There are three different tables – Starter, Main, and Dessert – that are progressively more difficult. There’s also a Daily board that changes… daily, which adds another layer to an already surprisingly replayable package. The gameplay is relatively simple: Hatch all eggs on the board by running through them, drop off the eggs by running over crosshaired spaces, enter a portal to reach a map within the map, then repeat. Every egg hatched adds a duck following Pix, an effective tail a la Snake. A combo meter in the top-right of the screen is filled up by completing each board in the previously mentioned order. As the point multiplier changes, so too does the game’s graphical style and speed. It’s a quick and easy visual way to figure out what your multiplier is at. Dropping off eggs without first collecting all of them will break your combo. Running into your own tail of ducks or directly into a wall will also drop your combo to a lower multiple. Arcade Mode is all about seeing a board, coming up with a trail that won’t trap Pix, then executing it. Sometimes, the last step is the most difficult. Supported leaderboards include local, friends, and online boards for each table. In a couple (or perhaps one, if you’re skilled) of plays, you’ll undoubtedly unlock new modes and other goodies. 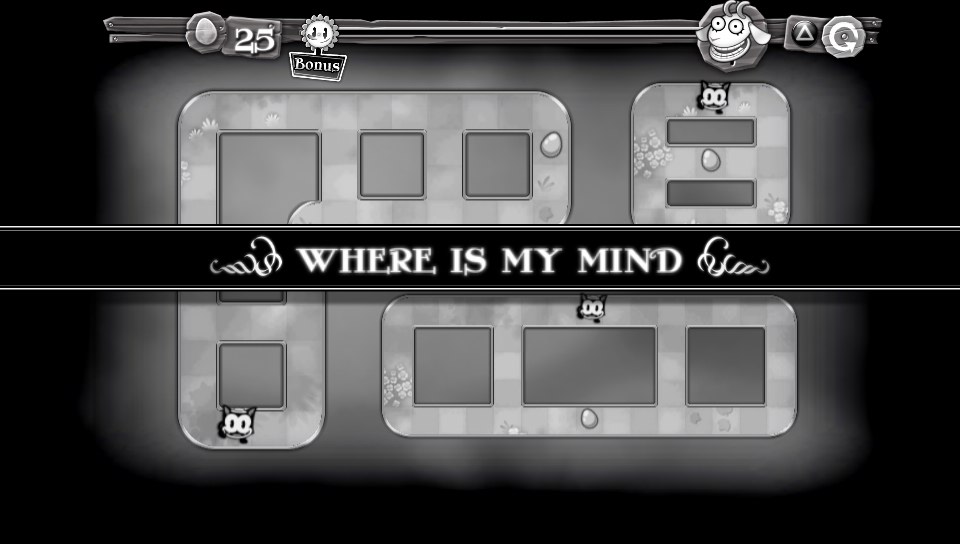 The Laboratory Mode is Pix the Cat‘s zen-like puzzle game. The rules are slightly different, almost devolved, from Arcade Mode. This gels nicely with the slide-under-a-microscope aesthetic. Each directional button press moves cell-Pix until he/she hits a wall. The objective is to collect all of the sleeping eggs then drop them off. The fact that Pix can’t move in real-time in this mode makes all the difference. Laboratory is best played when looking for a head-scratching, meditative fix. There are 100 levels in total, and a Bonus can be earned on each puzzle by completing it in the minimum number of moves. It gets fiendish. The other playable mode is Nostalgia, wherein Pix dons its Steamboat Willie trousers and has to collect eggs across 70 various stages. The objective in Nostalgia is to simply collect a set number of eggs as opposed to collecting then dropping off. I write ‘simply’ as if this mode is easy. It isn’t. There is a decent amount of variety throughout the stages; some being slow and steady exercises in strategic maze navigating while others are twitch reflex tests. The Bonus schtick in Nostalgia is the sunflower that makes its way from the top-left side of the screen to a goat’s head in the right corner. Completing a level before the goat eats the sunflower earns a ‘Bonus.’ The PS4 version of Pix includes Arena Mode, a four-player battlefest that looks like Bomberman meets Snake. It’s a ton of fun, but requires a host of local gamers.

The music in Pix the Cat is fittingly fun. In Arcade Mode, the music starts out slow and picks up in accordance to your current multiplier. The Fever theme, activated when you don’t screw up for a long while, adds to the already amounting stress of speeding up and avoiding obstacles. Breaking a lengthy streak is painful, but the game does a decent job trampolining your feelings by setting you near the next multiplier upgrade. There’s a narrator that notifies you of your perfect tables, your combo increases, and, of course, your combo breaks. The music in Nostalgia stands out as some of the best, catchiest puzzle themes I’ve heard in quite some time. As a matter of fact, I woke up this morning with it cranking out on repeat in my head.

Two minor complaints come to mind. First, the Vita version has relatively lengthy load times. I’m not talking anything in excess of a minute, but they are exacerbated in a game that looks and plays the way Pix does. Quitting a level in Laboratory to check out the Mission Gallery on the title screen, for instance, leads to a lot of downtime. The second minor flaw came while I was streaming for Extra Life. I put a bunch of time into the Vita version of the game only to find that there is no cross-save between it and the PS4 version. I was a bit put-off by the fact that I had to start with everything locked, including all of the progress I had made in Nostalgia and Laboratory. That feeling was soon assuaged, though, once I got to playing the game. What separates Pix the Cat from Pac-Man: CEDX or other frantic highscore chasers is its presentation and various gameplay modes. The game glows off of the screen. Nostalgia and Laboratory are different enough, gameplay-wise, to offer some reprieve from the sometimes maddeningly difficult Arcade Mode. It’s worth noting that Pix isn’t merely a pattern-memorization game. The egg layouts in Arcade and Nostalgia are slightly different every time you play, making for a bit more interaction than executing the same pattern over and over. Give it a try, fall in love, and meet me on the leaderboards!