Throughout this upcoming year we’ll be taking a journey with Max in her very own ‘coming of age’ story. Between returning to her home town, reuniting with an old friend she hasn’t spoken to in five years, and a newly found ability to rewind time, Max has a lot of things to deal with. Wherever the next four episodes take us, there’s one thing clear, Chrysalis is an incredibly strong and confident opening.

Max Caulfield returns from Seattle to her home town Arcadia Bay, Oregon when she’s given the opportunity to attend the rather prestigious school Blackwell Academy. Here she hopes to improve her photography skills, make friends, and of course reunite with her best friend Chloe. Max is shy, a little on the hipster side, and after a month back in town she doesn’t really have many friends. There is Warren who thus far seems like a nice boy, but it’s also clear he has strong feelings for Max that she doesn’t seem to reciprocate.

Blackwell Academy, from what little we’ve seen so far, immediately feels fully realized. After a short intro sequence the Life is Strange title card flashes on-screen as you’re able to walk down the hall observing students texting, others grabbing supplies from their lockers, and some jocks bullying a kid all while Syd Matters “To All Of You” plays through Max’s earphones. Immediately Life is Strange pulls you right into its own little world. Dontnod’s previous game Remember Me also excelled at creating a world and characters that you couldn’t help but grow attached to. Max Caulfield might appear shy at first, but throughout the first episode it’s already clear that there’s a lot more about her that we just don’t know. She’s stuck in an awkward high school stage, trying to find her way, while also dealing with time manipulation powers.

It’ll be easy to draw a lot of comparisons between any of the recent Telltale adventure games and Life is Strange. Right down to “This action will have consequences…” Life is Strange certainly owes a lot to Telltale and even Heavy Rain in some respects. Max can examine all sorts of things within the environment, she’ll strike up conversations with classmates, take photos of any number of things, and ultimately make a handful of important choices. Where Life is Strange distances itself is in a rewind mechanic that allows you to rewind time to correct mistakes or easily see alternate outcomes. One early example is when Max doesn’t know the answer to a question the teacher asks. It turns into a humiliating moment for her until she realizes that by rewinding time she’ll be able to answer correctly and avoid embarrassment. That’s a much simpler use of Max’s powers, but episode one has already shown numerous examples of how this power can have a major impact on future events. What will be interesting is to see how future episodes build on these powers and what sort of negative consequences they might bring.

Episode one can be completed in around two hours if you stick to the main story, but you can easily stretch that to 3-4 hours if you search for all the collectibles and talk to all the students on campus. Being thorough is something that I would highly recommend. Once again Dontnod has done a fantastic job of creating a place and characters that are believable. Some of the dialog can be cheesy, but so much of that comes from the fact that these are all high school kids. The fact that Chloe says ‘hella’ and the f-bomb is dropped dozens of times doesn’t feel forced. (Unfortunately the lip sync isn’t properly aligned which can be a bit jarring.) The entire episode is littered with references to real world movies, books, and even Kickstarter yet none of it feels fake. These are things that people talk about and it also helps that a lot of these references will connect with people who play the game. I mean there’s a moment where Max confidently says that Final Fantasy: Spirits Within is a great movie no matter what anyone else. Life is Strange is fully aware of itself and the writing demonstrates that throughout the entire episode. There’s literally a character that, after a major choice, looks at you and says “I will remember that”. I like to think that, in this moment, Life is Strange decided to poke fun at itself. 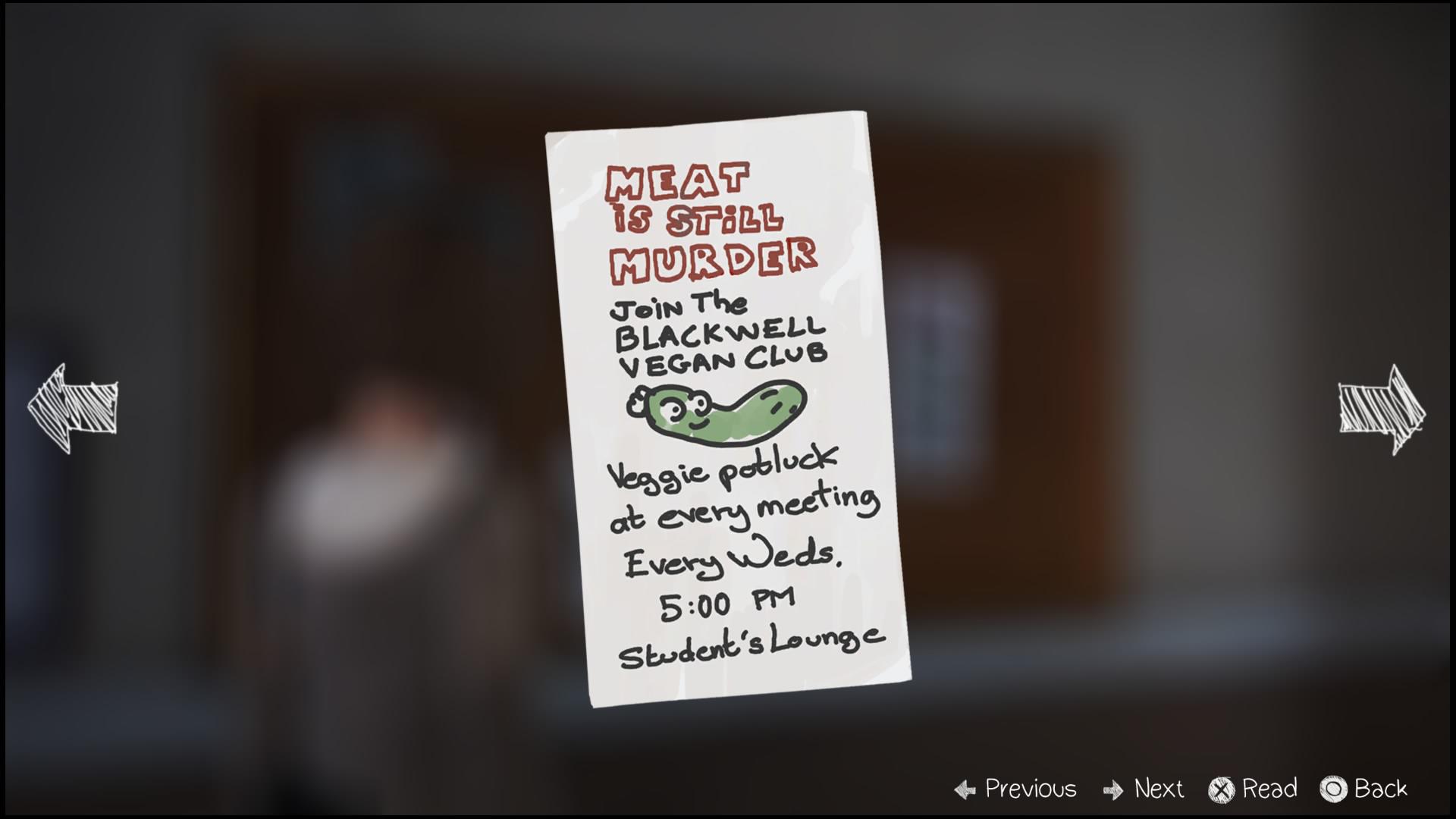 Once you finish Life is Strange the game allows you to return to specific chapters within the episode in “Collectible Mode” which lets you find anything you missed without it impacting any choices that you’ve made. Naturally this is really convenient for people who would like to go back to find whatever they’ve missed without messing up their save file. I love this mode and I hope it finds its way into other adventure games of this type.

The moment I became hooked came during a scene a little over midway through the episode in which Chloe and Max have just reunited and are catching up. From that moment on we get to see the chemistry between the series’ two main characters, but also between two best friends. Chloe slowly starts to bring out some personality in Max while we also get to see how Chloe has changed over the years. There’s already a great dynamic at work between the two of them and it’s something that I can’t wait to see progress over the course of the season.

With episode one in the books it’s clear that Max has some pretty big questions that she’ll need to tackle in the midst of dealing with everything that’s happened to her thus far. On top of that there’s also the mysterious disappearance of a girl named Rachel Amber, and a number of other smaller story lines that could potentially become rather important.

I’ve had faith in Dontnod ever since Remember Me and it’s really exciting to see them deliver on an incredible season opener. Now there’s still four episodes remaining, but for now Life is Strange has met my expectations. (Which I should say were really high.) The characters, the soundtrack, and the ability to rewind time have all come together to give Life is Strange so much personality. There’s a lot of promise here and I sincerely hope Dontnod can pull it off.

A copy of this game was purchased for review purposes. For more info on our review policy click here.