At a glance it’s easy to see Dragon Quest Builders and make the Minecraft comparison. The two share a LOT of similarities and I’m sure Builders was certainly inspired by the Minecraft craze. DQ Builders however offers up a more structured experience that could possibly carve out its own niche. From my understanding the original Dragon Quest ends with the villain giving the hero the option to join him. In the actual game the hero turns down this option and defeats the villain, but in DQ Builders we find ourselves in the alternate timeline. The world is destroyed and everyone, except for you, has forgotten how to build. You are not a hero, but you are a builder and that’s a gift that is hugely important in restoring the world.

Throughout four chapters you’ll travel to different continents and build up four separate camps. Each camp has its own separate storyline and will essentially teach you how to build and craft all sorts of different things. In the first camp I helped rebuild much of what was lost, provided instruments needed to cook food, and eventually built a huge wall around the camp to protect from invading monsters. In other instances I carried sick people back to a hospital that I built, used a cannon to take out large monsters, and even did a fair amount of farming. Much of your minute-to-minute actions are very similar to what you’d do in Minecraft or any other game of its type. The structure in DQ Builders, as mentioned before, is where things begin to differ. In the story mode villagers will give you quests to complete. Quests vary from building a certain type of building, crafting a certain number of items, or even going out and finding a trapped villager. There’s always something to do to progress the story. These quests also work double as a way to ease you into this world and introduce you to new mechanics within the game. The moment I got a fishing rod I remember thinking “there’s fishing in this game too?!”. 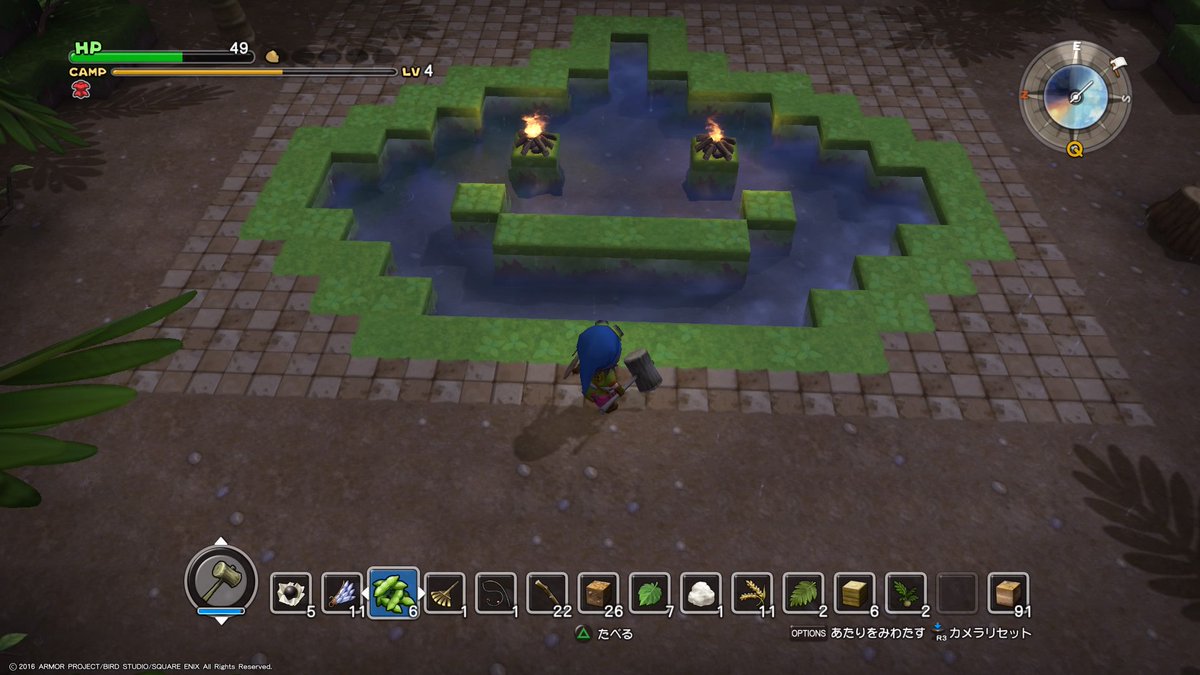 There’s so much in the world to discover. In my journey I came across some sort of cult deep inside a pyramid, a fighting-dojo that taught me how to prevent confusion, and numerous other things that I won’t spoil. What’s key is that this doesn’t feel like Minecraft with a Dragon Quest skin over it. This is a Dragon Quest game through and through. It’s a game that, despite a world ending scenario, is capable of being so jolly all the time. I absolutely adore the way the villagers run up to me and clap every time I finish a special task. Every song in the game, as you’d expect from DQ, is just fantastic. The journey that I went on throughout each chapter felt extra special when I realized what Chapter 4 would entail. It taps into one of the reasons why I love Dragon Quest VIII so much. It’s one of the only games, to this day, that left me feeling like I actually went on a true globe-trotting adventure. The characters you meet, the memories you make, and the people saved all mean something. The fact that I actually BUILT everything to my liking made the whole thing feel extra special. I feel this strongly about the game and I can’t even read what these villagers are saying to me! That’s crazy!

It really wasn’t until the other night that I started getting into the Free Build mode of the game. In Free Build you’re put on an island without any monsters to attack your camp. On this island you’re free to build whatever you want and even share those creations with the community online. There’s also areas within this island that the game will seamlessly load other creations for you to look at and be inspired by. The creations get loaded up and replaced pretty often so there’s always something new to look at and explore. (I personally have already seen some really incredible stuff.) With the completion of each chapter you’ll open up new islands to explore in Free Build that’ll contain many of the biomes and monsters found throughout the story mode. You’re essentially given every recipe you’ve unlocked throughout the story and given free reign to build whatever you want. In this mode you still have to go out and gather resources to build which is a little disappointing. I love that in Minecraft I can just go into creative mode and have an infinite number of resources. It’s a great way to just let out your creativity. You’ll have to work for it in DQ Builders. This is by no means a deal breaker for me, but rather something I’d like to see in a potential sequel.

I was a little nervous importing this game without a very good understanding of the language. Having an understanding of how Minecraft works definitely helps, but ultimately the language barrier isn’t that hard to overcome. In over 50 hours of play there were only 3-4 brief moments in which I had any sort of trouble understanding what I needed to do. I’m happy I ended up taking the plunge, but I do really really hope that this game gets a localization. It would be a shame if DQ Builders never found its way over.

I absolutely adore this game. It’s got a lot of what I love about Dragon Quest while also offering a bit of a spin on the run-arounder genre. The more structured approach is something that I really like and I can imagine a lot of people might end up preferring it over Minecraft’s ‘just do whatever you want’ approach. Also this game has GREAT (FANTASTIC!) boss fights.

I give Dragon Quest Builders 20 Slimes out of 1 Dragonlord.

Collin & Curtis In The Morning: Episode 40 – No Man’s Sky Delayed